My second trip to the Chicago Botanic Garden was impromptu, and it was entirely an accident that I ended up there while the tulips were beginning to bloom.  I’d heard that the gardens are nice during tulip season and rose season, but the only time I’d previously been to the gardens was a couple years ago at a time when neither was in bloom.

I saw when we arrived that the tulips were blooming, and I spent the majority of my visit walking around and looking for tulips.  Whereas I was overwhelmed by the size of the gardens during my visit, I was better oriented this time around and able to focus on finding flowers that were blooming instead of running around in a mad rush trying to see everything.

I’ve caught glimpses of tulip season before, in sidewalk plots planted by neighborhood community associations and on the campus of my university, but I’ve never been in a tulip garden before.

The Chicago Botanic Garden does tulips much more extensively though.  There were flowers of all colors and varieties, including a number of multicolored ones, which were my favorites. 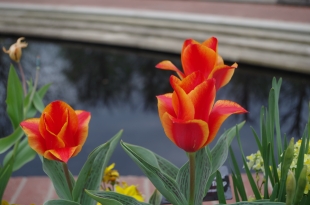 There are over 100 known varieties of tulips, but not all of them are available for garden-growing.  Most of the tulips in bloom when I was at the garden were botanical tulips (also called species tulips).  Botanical tulips differ from the tall hybrid tulips often seen in gardens, and they are often two-toned.

Which tulips are your favorites?