I’m challenging myself to #Take12Trips this year as part of a resolution to get out and explore more.  The trips can be anything from international vacations to a day out in the city.  I’m cheating a little bit though.  My schedule is rather unpredictable, so instead of taking one trip a month as the challenge was originally designed, I’m aiming instead for 12 trips total during 2015.  I know I won’t be able to do much when school is very busy, as in January, so I will try to go on more adventures when I have a little bit of free time.

My first trip of the year took me to my first international destination and a new country for me: Panama!  I chose this destination somewhat randomly because flights were cheap and I wanted to see the canal.

Container ship on the Panama Canal

I had been planning this trip with a friend from medical school for a long time since she only gets a couple weeks of vacation a year and we wanted to go on an adventure together.  Panama seemed like the perfect mix of exotic and familiar: it uses the US dollar and is very safe but Spanish, not English, is the primary spoken language.  I was excited to be able to practice my Spanish, and my friend was excited to go somewhere that she wouldn’t have ordinarily gone. 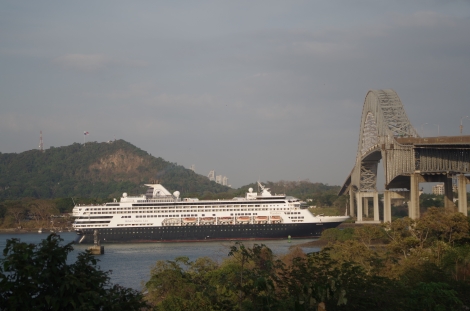 Ship crossing under the Bridge of the Americas, the entrance to the Panama Canal

I was working a lot in the weeks leading up to the trip, so my planning was a little bit haphazard.  Fortunately, my travel buddies were willing to pick up the slack.  I had planned for us to spend a couple days in Panama City, take a tour of the Panama Canal, and then go to western Panama to visit a coffee plantation and go hiking near Boquete.

I should have seen it as a sign when I woke up an hour before my flight with the feeling that something was wrong.  Obviously, something was wrong – I was about to miss my flight.  I’m a little bit embarrassed to admit this since until last December, I had never missed a flight that was my fault.  I called the airline only to be told that I would have to pay an inordinate sum of money to change it.  At this point, I contemplated canceling the trip.  It was going to be expensive enough that I wasn’t sure it would be worth it.  However, the fact that I was meeting friends there eventually convinced me that I shouldn’t back out.  I ended up paying more for the flight change than I had for the original roundtrip ticket, which hurt my soul, but I reminded myself that I was going to have a lot of fun.  I also reminded myself to buy a new alarm clock. 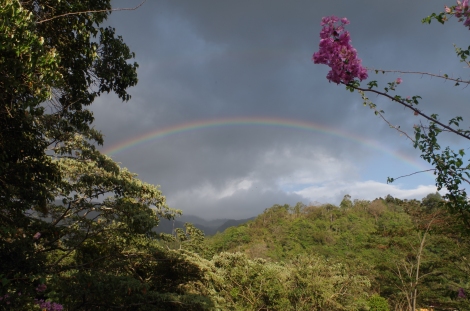 When there is pressure to have fun to make things feel worthwhile, I think it’s way harder to have fun.  I kept thinking about how much money everything was costing, which put a damper on my vacation.  I had expected the trip to be fairly cheap and having to suddenly shell out an enormous sum of money for a flight change changed my mindset toward the trip.  I still enjoyed myself though, and I think that Panama is definitely a destination worth exploring.

My bad fortune and travel failure seemed to be in endless supply on this trip.  I smashed my knee on a rock when I jumped off a waterfall during a tour of the Panama Canal.  I left my passport in a hostel in David and only realized it when I tried to check in at the airport.  I left my sunglasses on an airplane in Panama.  I got mild altitude sickness while trying to climb a volcano.  I got soaked at the beginning of a day hike and spent 6 hours trudging through the mud in wet clothes.  For the record, wet underwear is the worst, followed closely by wet socks.  I got heat exhaustion in Panama City because it was nearly 90 F.  I got sick after all the extremes in temperature and spent the week after my return being minimally functional at work.

Despite all of the misfortunes, which were largely of my own making, I enjoyed the trip.  I felt like I was challenged as a traveler, and although it wasn’t always pleasant, it was a good exercise in making decisions under pressure.

Panama City is not like most other Central American cities.  In places like Guatemala City, I would be terrified to just wander around the city for the sake of exploration, but Panama City is actually fairly developed and fairly safe.  I heard it compared to Miami and Hong Kong, but not having been to either of those cities, I can’t really speak to that. There was a beautiful skyline and a nice downtown area that was full of cafes, restaurants, and tourist attractions.

Despite being in Central America, Panama City is actually quite expensive.  Prices in many of the restaurants and cafes in the more heavily touristy areas are on par with American prices.

We spent a weekend in the western highlands of Panama, mainly in Boquete.  Boquete is a small town in the mountains, about an hour’s drive from the city of David, where the nearest airport is located.  It has become a very popular place for expats to retire, so there is a fairly large expat population.  Boquete is well-known for its coffee plantations, producing some of Central America’s finest coffee.  We toured a coffee plantation called Finca Dos Jefes, run by an American expat.  I’m not a coffee drinker, but I still found the tour of the plantation to be fascinating.  Plus, I love the smell of coffee, so I enjoyed inhaling the magical scent of beans being roasted.

Boquete is also the closest town to the easiest path up Volcan Baru, the highest peak in Panama.  The trek is a brutal one, covering 13 km and gaining around 2000 m in altitude.  However, both the Pacific and Atlantic Oceans are visible from the summit, making the arduous climb worthwhile.  Many people choose to do the climb during the night to reach the summit at sunrise, which is when there is the best chance of being able to see the oceans.  We started climbing around midnight and made it up about 5 km before turning around because of altitude sickness. 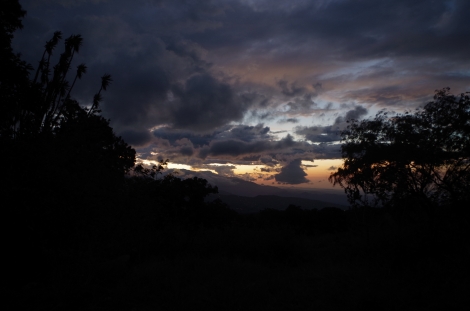 The next day, we set out to hike the Sendero Los Quetzales, named after the elusive bird, the quetzal.  The hike goes between Boquete and another town, Cerro Punta.  We took a taxi to Cerro Punta with the intention of hiking back to Boquete, picking up our luggage, and making our way back to David for the night.  By the time we got to Cerro Punta around noon, it was drizzling.  It was uncomfortable, but we figured the rain wouldn’t last.

Wow, were we wrong.  It started pouring about an hour into our hike and kept pouring for the duration.  It was a 6 km hike, so I figured that even on the muddy trail, it would take us 3 hours to complete the trail.  In reality, it took over 6 hours to finish the trail and get to a bus stop.  By that time, we were all completely soaked and freezing and a little closer to hypothermia than we would have liked.  Fortunately, we all had dry pajamas back in Boquete, and once we got back, we peeled off all of our wet clothes, changed into some dry ones, and huddled under blankets for a little while before finally making our way back to David.

I had planned for this to be my only international trip this year.  After a marathon travel year last year, I wanted to relax a bit this year and save some money.  Although in some ways, the trip was disappointing, I’m not sorry I went.  It was a good experience.  Plus, I’ve learned to always set three alarms.

Have you ever been to Panama?