During my recent trip to Seattle, I had enough time for a couple of day trips in the region.  Since I had access to a car, I wanted to explore some of the beautiful national parks of the Pacific Northwest.

I had lunch in Tacoma with a friend, and at the end, there was a decision to be made.  Mt. Rainier or Mt. St. Helens?  Both promised to be scenic and interesting, and I eventually settled on Mt. Rainier because it was closer.

The drive to Mt. Rainier was pleasant, taking just under 2 hours to enter the park.  It was a clear day, so Mt. Rainier was visible from the road, and  I could see it getting closer as we drove.

Mt Rainier from the road

Once we entered the park, we drove another 30 minutes or so to get to the Paradise Visitor Center.  On the way, I had to stop multiple times to take in the view. 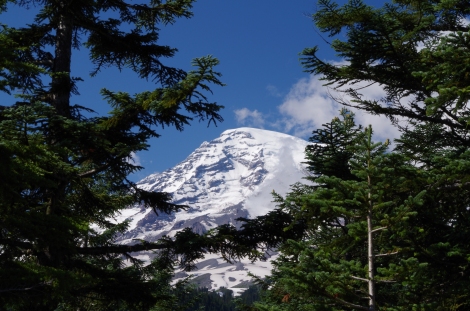 Mt. Rainier through the trees

Paradise Visitor Center is appropriately named, I think.  On this clear, sunny day in particular, the view was breathtaking.

On the advice of a park ranger at the visitor center, I opted for a short hike along the well-trodden Skyline Trail to Myrtle Falls.  It was quite busy with lots of families making their way along the path, but the view of Mt. Rainier was spectacular the whole way.  We were close enough to see the glaciers covered the sides of the volcano.

Mt. Rainier is obviously the main attraction here, but the waterfall was also nice.

My only complaint about this path is that there was a traffic jam at the waterfall, with the more aggressive camera-carriers pushing people out of the way to get their photos.  Nevertheless, the combination of Mt. Rainier and the water made for some nice shots.

Further up the trail, there were a few patches of white snow, and I stopped to watch some small children playing there. 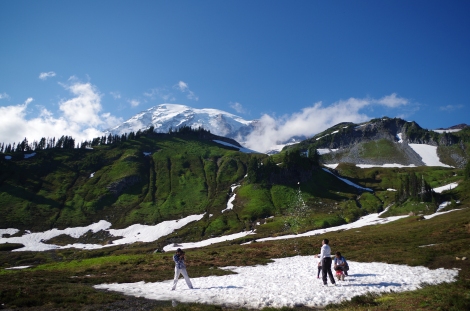 Playing in the snow

Since I had only planned for a day trip, by the time I had hiked for an hour or so, it was time to head back to the car.  I wish I had more time to spend there, since some of the other hiking trails look really nice, but I will definitely be back!