Nearly three hours away from Seattle, Olympic National Park isn’t quite day trip material…but I decided to do it anyway.  The long drive around Puget Sound was lovely, and the Olympic peninsula was lush and green.  Plus, it was clear enough that we could see Mt. Rainier from the road.

Mt. Rainier from the highway

We drove past Olympia, which I always forget is the capital of Washington.  The capitol building is right on the highway, so we caught a glimpse as we drove past.  The day was sunny and beautiful, which seems contrary to everything I have ever heard about Seattle, but I had no complaints.

Our destination was the southeast corner of Olympic National Park, and we were planning to hike near Staircase Ranger Station.  The last few miles into the park were on a dirt road that was slow and bumpy, but I was too busy looking at the magnificent blue lake to notice.

Blue water of the lake

There were people hanging out and sunbathing along the road next to the lake.  It looked relaxing, but I wanted to justify packing my hiking boots.

We arrived at the ranger station around 3 in the afternoon, aiming to get in 3-4 hours of hiking before driving to the airport to catch a red-eye flight back to Chicago.  The park ranger recommended the Staircase Rapids Trail, which connects to the Four Creek Trail.  The hike was fairly flat and followed the creek for a mile or so before becoming more uneven and challenging. 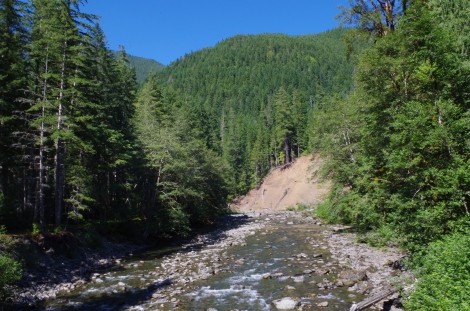 Hiking along the creek

The trail passed through the forest, with lots of trees and moss.  As we were hiking, we even saw (and heard) a giant tree fall.  When a tree falls in the forest, it does make quite a lot of noise! 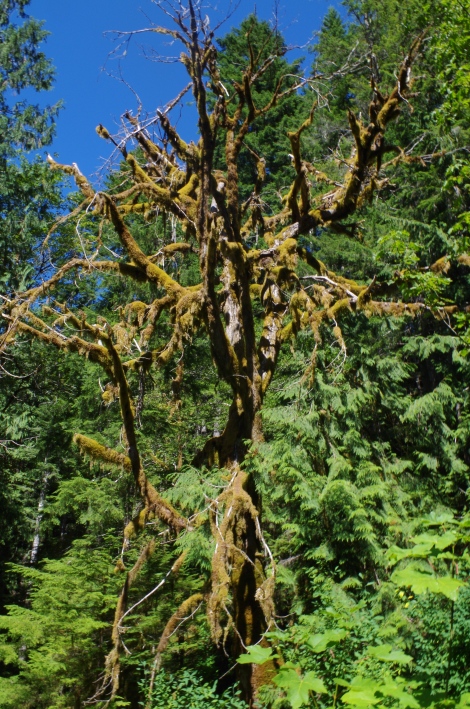 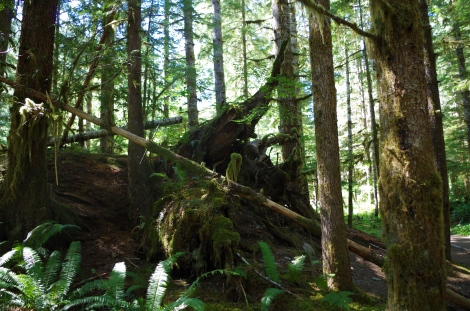 The trail ended by going into the creek, at which point we turned around instead of fording the creek.  We took a slightly different route back to the ranger station, crossing a suspension bridge to the other side of the creek to follow another trail.

Suspension bridge across the creek

The hike had taken close to two hours, and by the time we got to the parking lot, I was somewhat tired.  That doesn’t say anything too good about my current physical shape, I think.  After another hour or so hiking another flatter trail, it was time to leave.

The drive back to the airport was much more eventful than the drive to Olympic National Park.  The highway was backed up, so we ended up taking back roads to get to Tacoma, where we got on the highway.  Although the alternate route required extensive use of Google Maps, it was also much more scenic, and I was unable to resist taking a few pictures of the sunset from the car.

The alternate route also unexpectedly took us over the Tacoma Narrows Bridge.  Now, the only reason I know of the Tacoma Narrows Bridge is that it collapsed into Puget Sound shortly after being built.  The example of this bridge was used in my high school physics class when we discussed resonance.  There was even a video of the bridge’s collapse to go along with it.  So, I was slightly terrified to be driving over the bridge despite knowing intellectually that it is completely structurally sound.

Fortunately, it was not windy, so the drive over the bridge was relatively benign.

After spending just a few hours there, I realized that Olympic National Park is enormous, and although the area of the park in which we were hiking was fairly well populated by hikers and campers, it would be quite easy to drive farther into the park and be alone.  Unfortunately, my time there was limited, but there are great trails for longer day hikes and backpacking, which I would love to do.  It’s already on my growing list for things to do on my next trip to Seattle!

What is a crazy day trip that you have done?